Before deciding on starting a Search-Fund we have done some basic comparison of asset class performance mainly for our own purposes and we would like to share the results here. The data is publicly available and just needs to be pulled together as we did it in the table below.

We would like to remark that the comparison needs to be handled with care for various reasons:

Although relatively unknown and without a doubts risky, considering the IRR it can be said that Search Funds are an asset class that can not be afforded to overlook.

We think Search Funds are especially interesting for investors who want to invest smaller tickets in a high performing asset-class. Investors who do not have the opportunity to invest as a Limited Partner in a Private Equity Fund but still would like to enjoy similar ( in fact actually much better) returns. Investors who can afford to only allocate small amounts of capital per investment but who are not satisfied with the highly volatile and lower return profile of startup-investments.

Investors should be aware of the very high volatility and risk behind search funds however. We copy a part of the latest study from Stanford below:

"As an asset class, search funds have achieved an ROI of 8.4x and an IRR of 36.7 percent. When excluding unsuccessful searches in order to further examine the much larger acquisition investment, the overall asset class MOIC increases to 8.5x and the effect on overall IRR is negligible. The median fund returned 1.0x of initial search fund investors’ capital, whereas the top - performing fund returned well over 200x. Excluding search funds that closed without an acquisition, the median return on all search funds that have completed an acquisition is 2.3x ROI. The overall asset class ROI, which declined from 10.0x in 2013 to 8.3x in 2015, is partly due to recent company valuations of less than 10x, and partly due to the change in calculation methodology for the 2015 study as described at the start of this section. Since the 2001 study, the aggregate IRR of all search funds (which included both unsuccessful searches and those that completed an acquisition) has tended to fluctuate between 32 and 38 percent, with the exception of the 2007 study, where IRR rose to 52 percent. The performance of individual search funds has varied widely over the years. Distribution by ROI ranges from greater than 10x for highly successful companies to total loss of capital. Distribution by IRR ranges from greater than 100 percent to negative; in cases of a total loss of capital, IRR cannot be calculated."

The following picture provides a better understanding of potential outcomes and distribution of such outcomes over a sample of search-funds in the US: 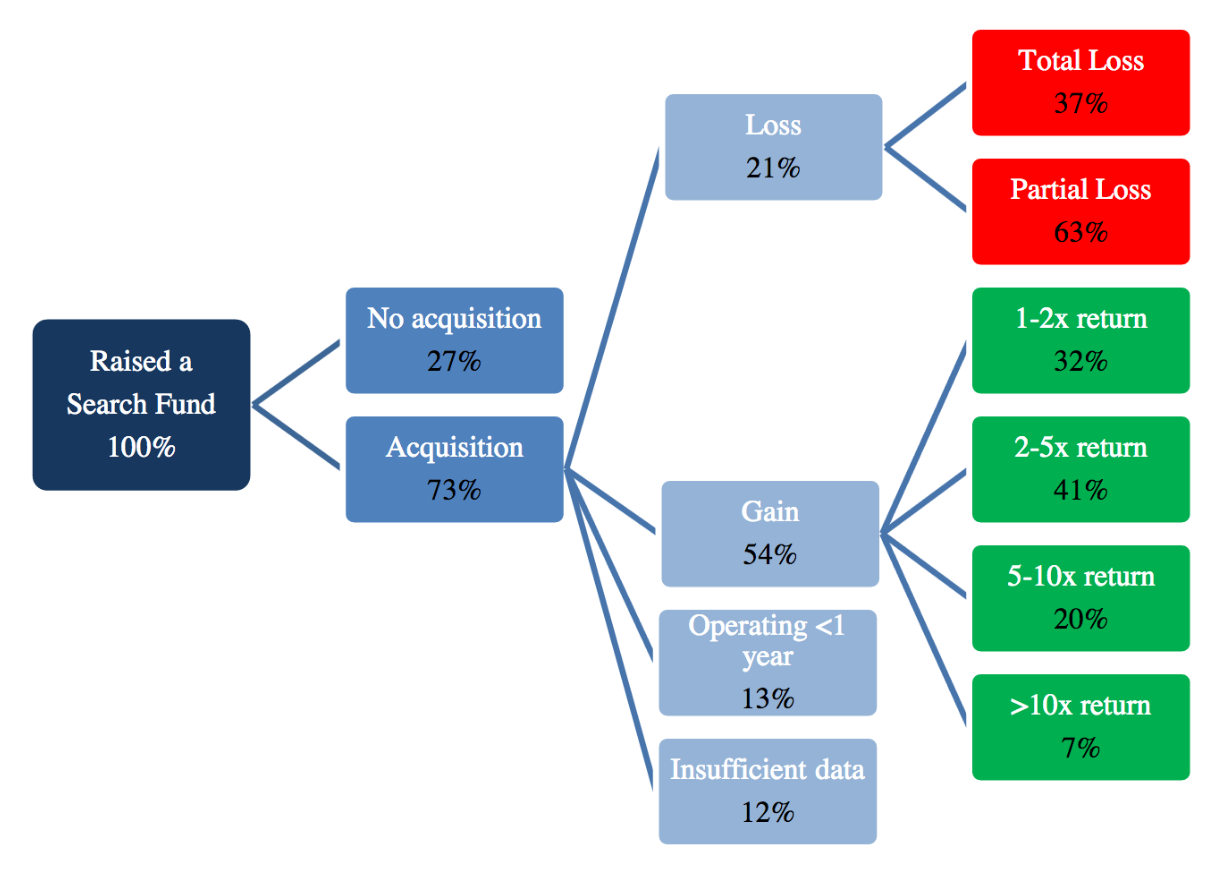 Another comparison which shows how the IRR is influenced by some very high performing funds provides more information on the distribution of results, it combines findings from a Stanford study with those from an IESE study:

Although the average performance of US as well as international Search Funds are strongly influenced by the top-performing funds, we find it interesting that the average IRR still remains considerably higher than any other asset class we compared the search fund model to.